I have been painting Napoleonic Austrians. I plan to play the battle of Raab from 1809 and need to add some specific units. The first is a stand of Hungarian Insurrection infantry. In an army of white, these guys in their blue will break up the landscape. Each large, 3"x3" base in Volley and Bayonet is either a brigade or large regiment. I need three of these Insurrection brigades.
I added some landscaping to this base. The plowed field is one of my wife's blouses that she no longer wanted. I looked at it as I put it into the charity pile and decided it would look good on the tabletop as terrain. I'm working on larger plowed fields in my spare time. The stone wall was created with air dry clay. I still need to put the flag on this unit and ink their faces. 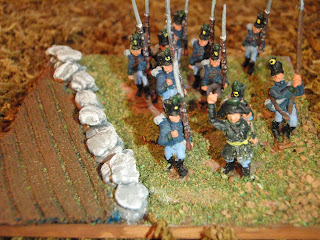 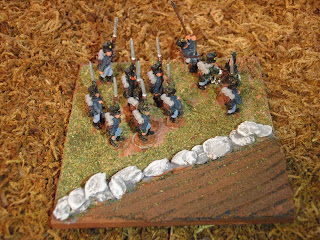 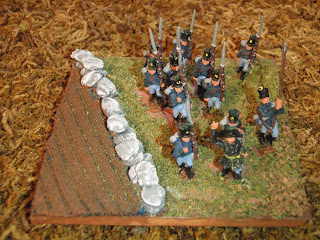 Next is a stand of Hungarian Insurrection cavalry. This specific base is a one strength point "skirmish" stand. Normal cavalry stands in my armies have 6-8 figures on them. The skirmish bases have only three figures. I need to paint one more of these bases. 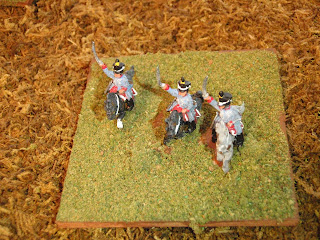 Finally there are three infantry skirmisher bases. In Volley and Bayonet, these 1.5"x1.5" bases represent detachments of light infantry or small units of other infantry. There are two jager bases and one landwehr detachment. 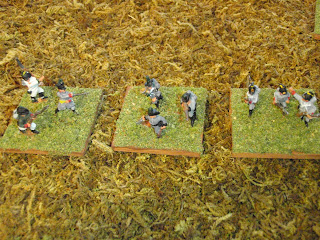 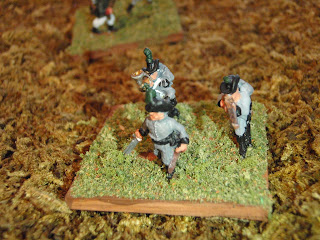 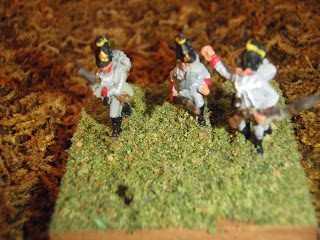 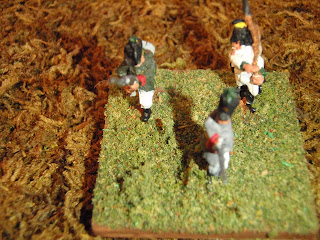