Last weekend we gathered and played my Lake Baikal scenario for the Russian Civil War. Our rules of choice are Red Actions from the Perfect Captain. This game had three gunboats and two armored trains, as well as three gun barges and four batteries firing from land. It was a completely different game than what we normally play; different and yet still fun.

I plan to post the scenario soon. The premise is that two Czech Legion armored trains are moving through this area as they roll East. They are "escorted" by a brigade of Cossacks from the Siberian Provisional Government. A small infantry command garrisons the train station.
A group of gunboats are moving to attack, accompanied by a transport. The game begins and both sides fight to control the rails in this area. 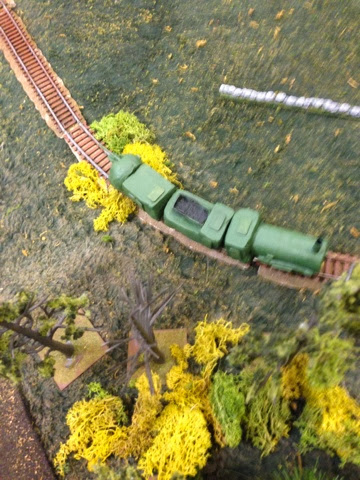 I needed to have a large hill on the table. I wadded up newspapers and put my ground cloth over them. With a little more practice, I hope to be able to perfect this terrain method. 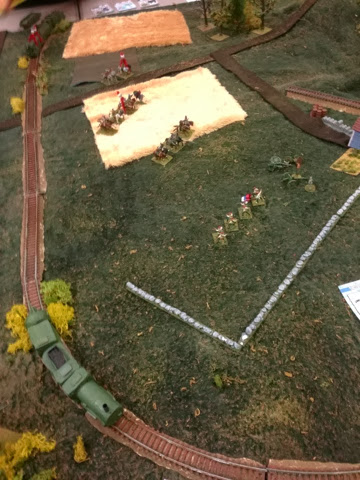 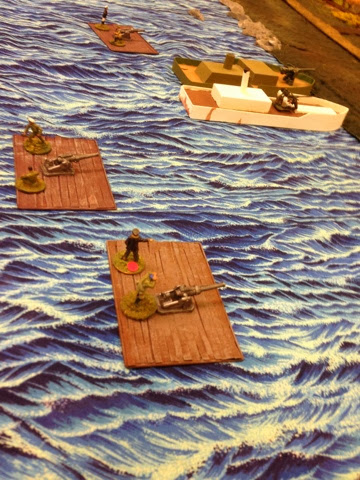 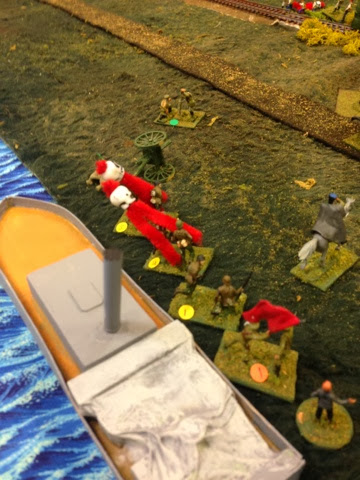 It was a very lopsided affair. The Whites did not put a single hit on a gunboat or a barge. The Reds managed to destroy all of the batteries, as well as both trains. The only positive for the Whites was the beating they gave the Red infantry and cavalry that landed from the transport.

A fun game, but the next one will be more traditional with infantry and cavalry roaming the table.

As a matter of fact, I'm working on a scenario for the Red attack on Kiev in early 1918. 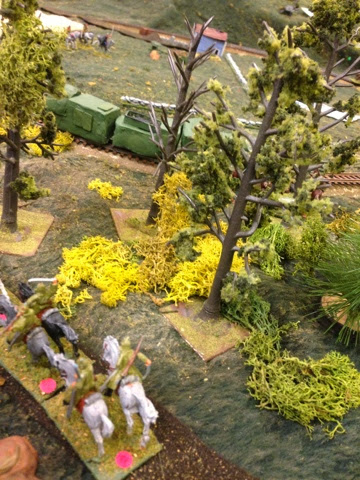 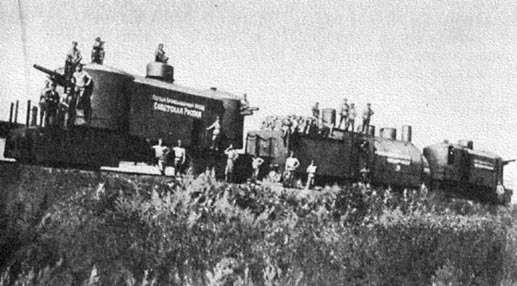 During the Russian Civil War, the shore and water of Lake Baikal was the scene of many skirmishes and battles. The best source that I have found is Jamie Bisher's "White Terror; Cossack Warlords in the Transbaikal." In case you haven't already heard me say it, this is an excellent book and highly recommended.
Our next club game will be an amalgamation of these fights. It will have armored trains, gunboats, Cossacks, and more.

The political/military factions in the game are:
Reds
Czech Legion
Siberian Provisional Government

The Czech Legion has two armored trains moving along the shoreline. The Czechs are moving East, eventually headed to Vladavostok. Although on the move, they will not flinch from engaging the Bolsheviks.
The Reds have three gunboats and a transport in the lake, moving to engage the Czechs.
The forces of the Siberian Provisional Government are represented by cavalry and a tchanka. Officially allies of the Czechs, they are reluctant to see them evacuate to the East.

There will also be shore batteries, artillery barges, and miscellaneous other detachments.

I will post an AAR after the game, as well as a full scenario. 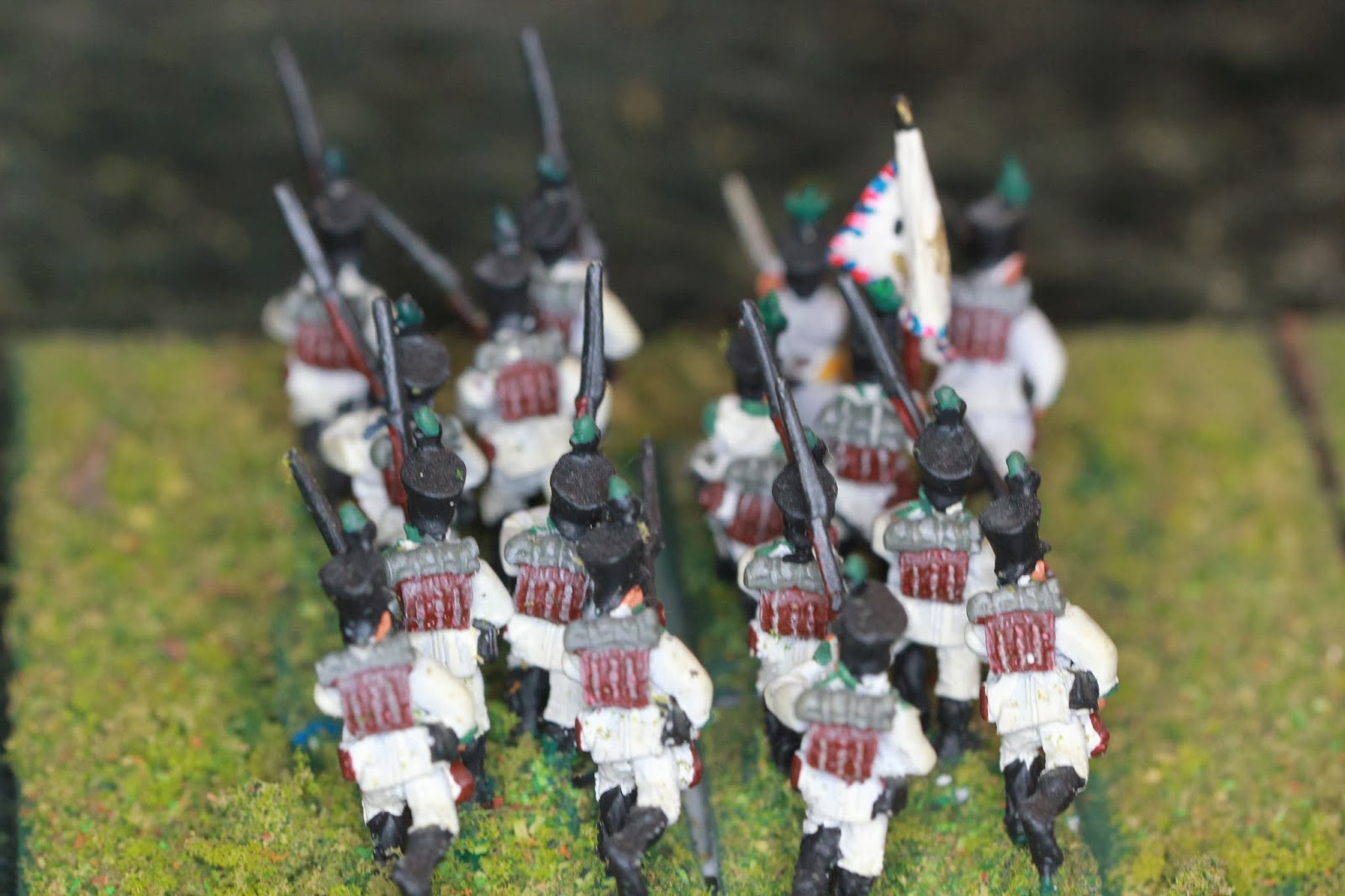 Is this a picture of the Austrian line advancing, or retreating? Read on to learn...

My friend, Jerry, was in town recently. He and I started playing Napoleonic miniatures in 1972. Our most recent game, in which my son, Brady, also played, was a scaled down version of Dresden. I've been wanting to play a Dresden scenario for a while, but hadn't been able to pull a big game together.
For this game I cut down the armies for both sides; one French player, me, one Russian player, Jerry, and Brady played the Austrians.
The game was set up as a desperate French defense. It worked well. 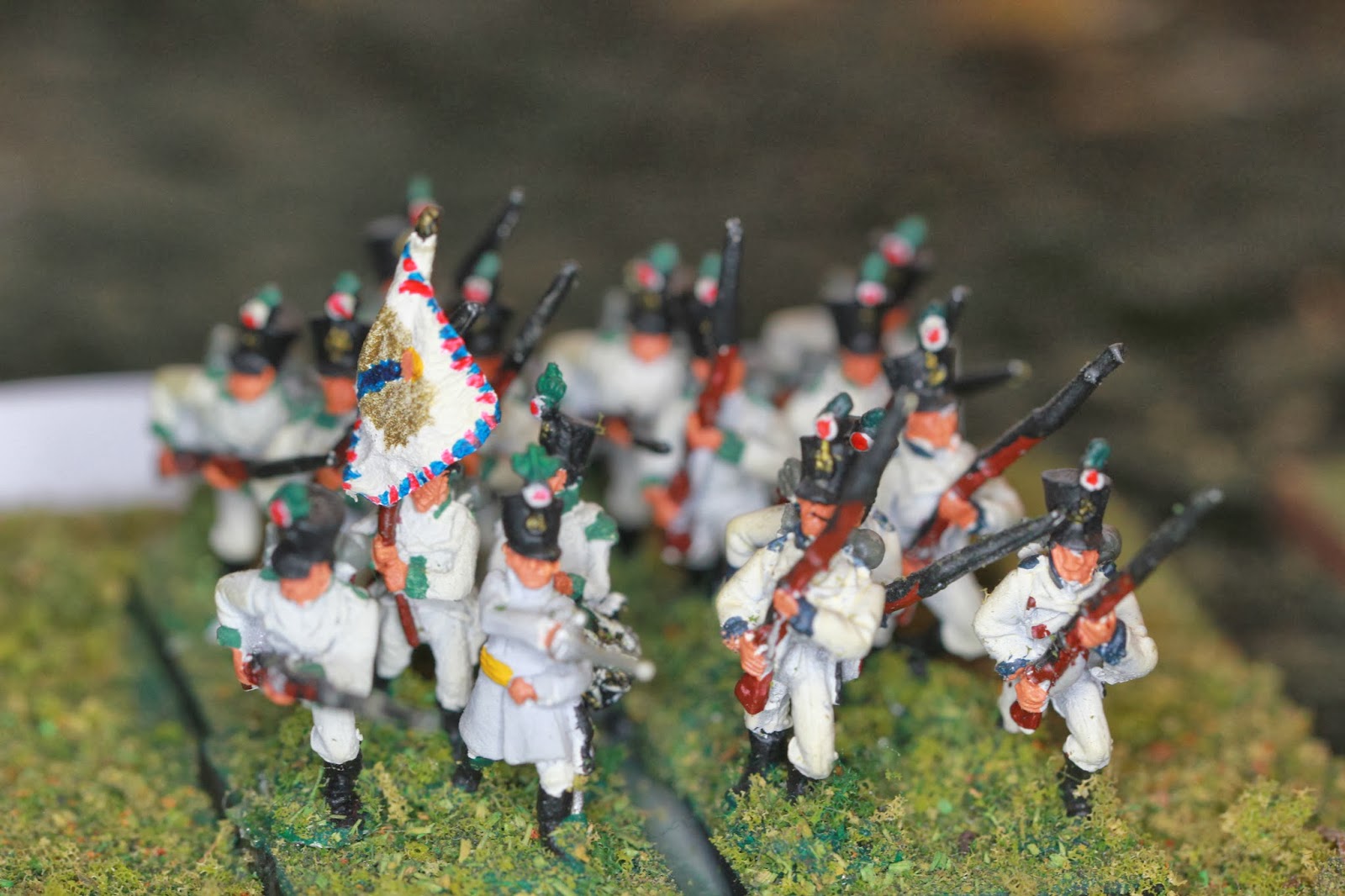 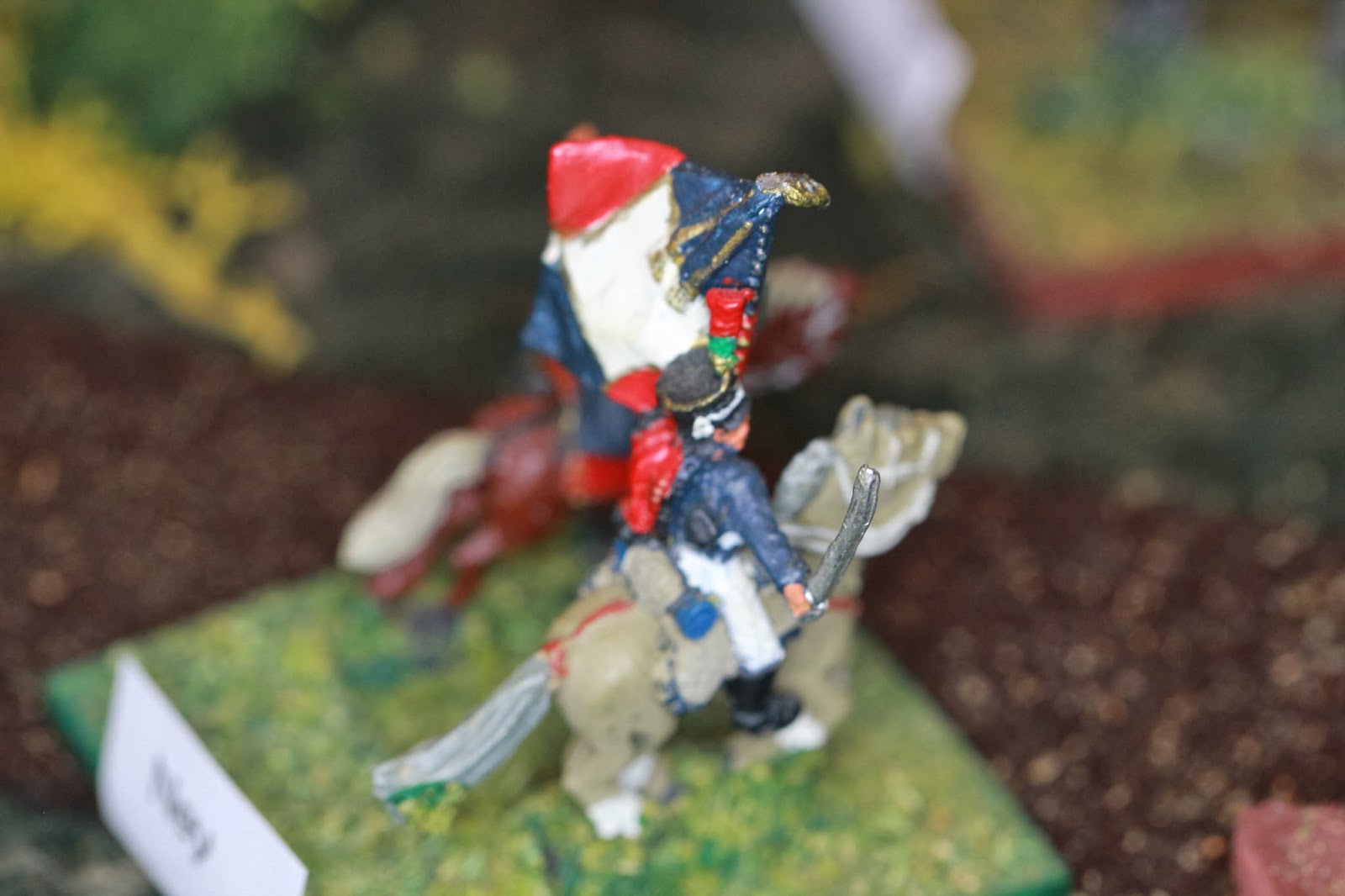 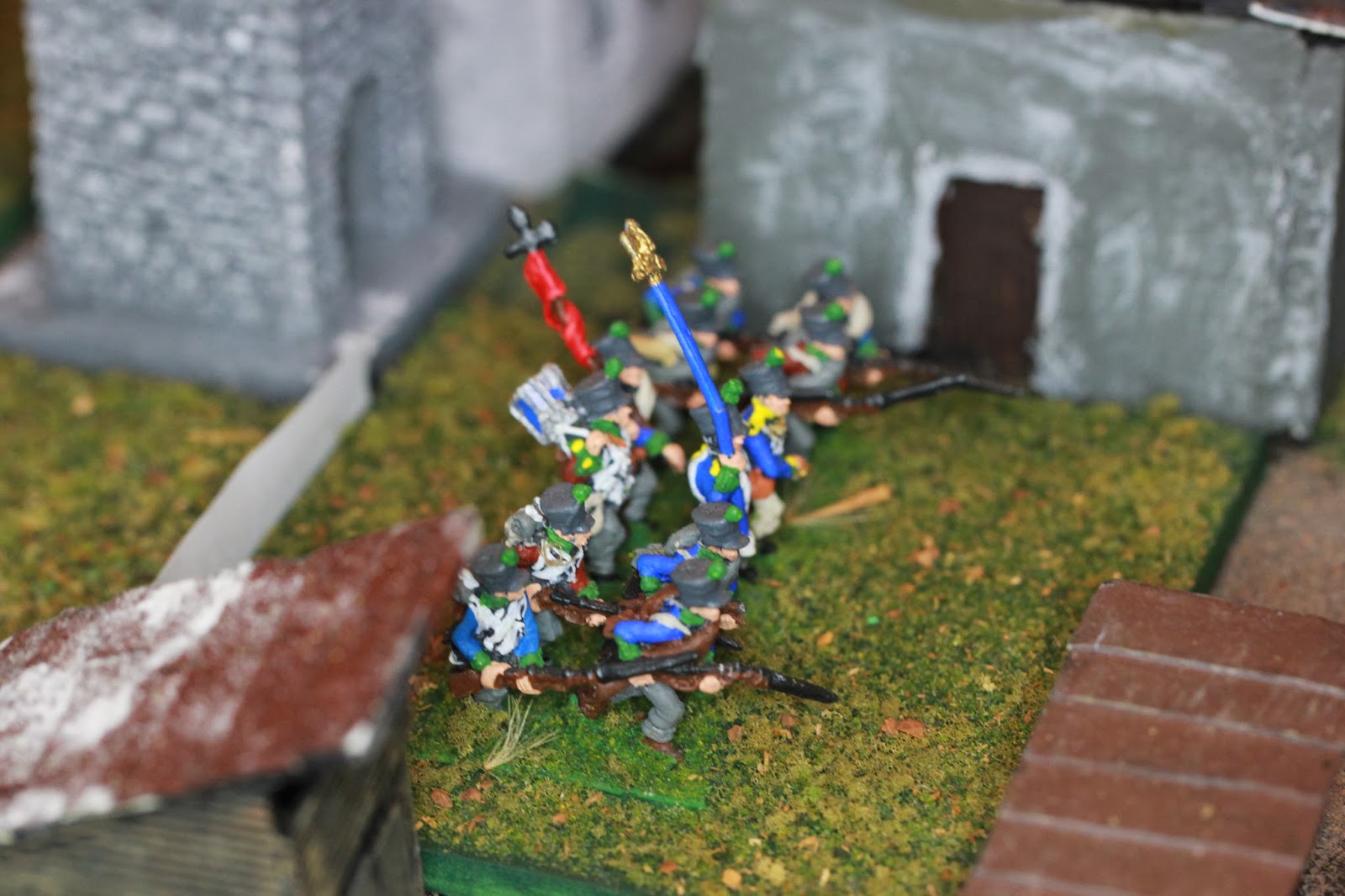 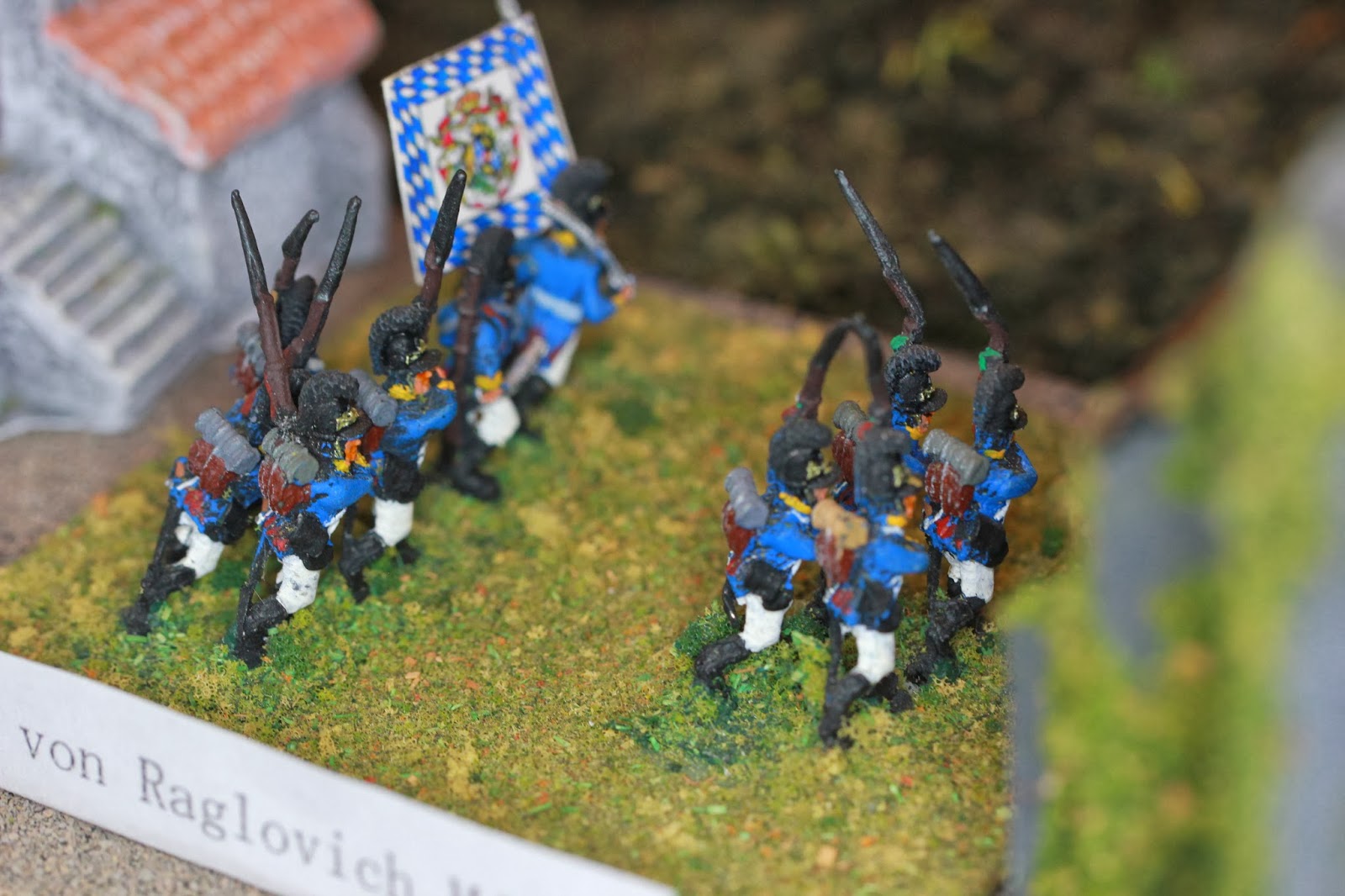 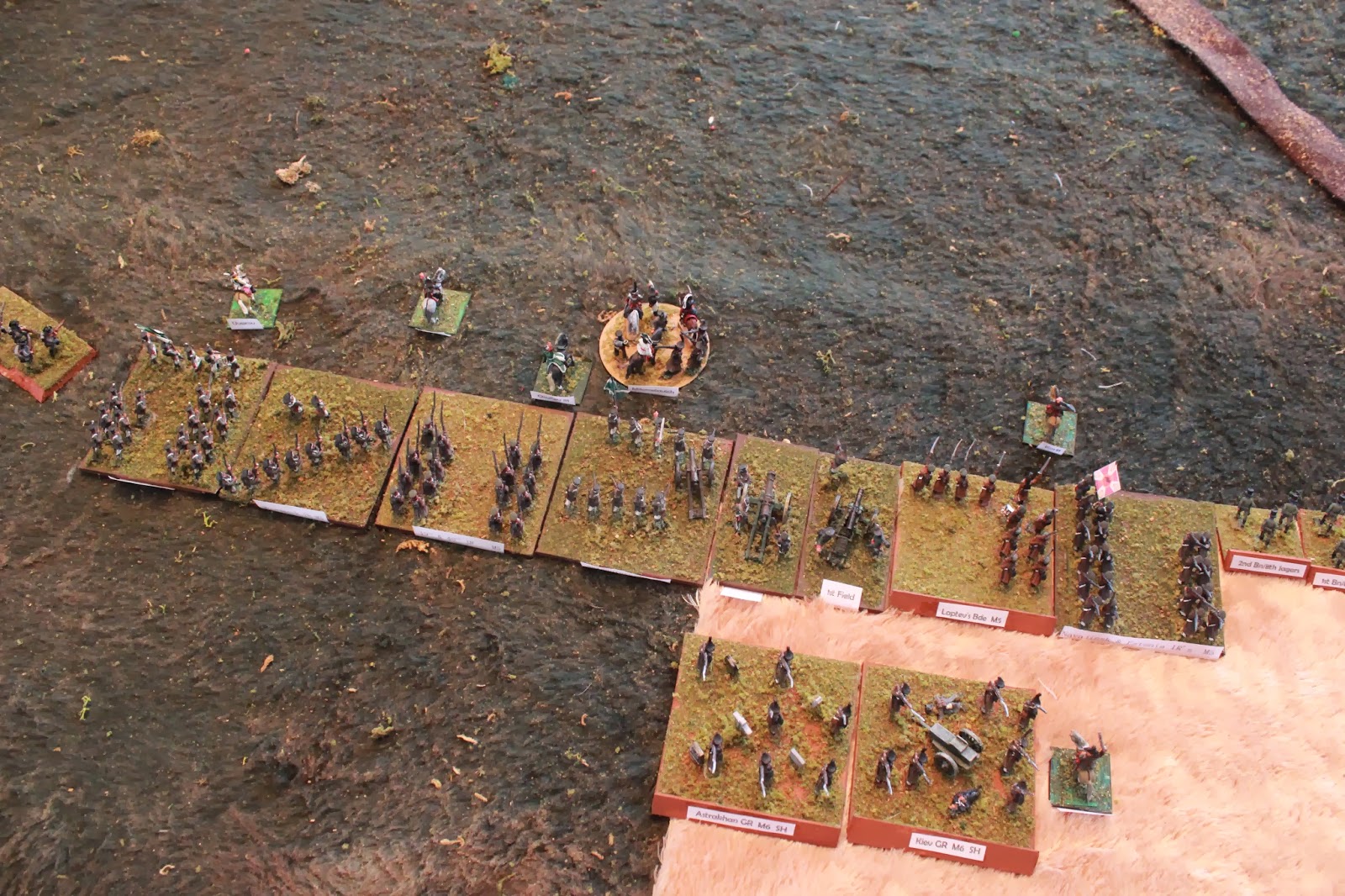 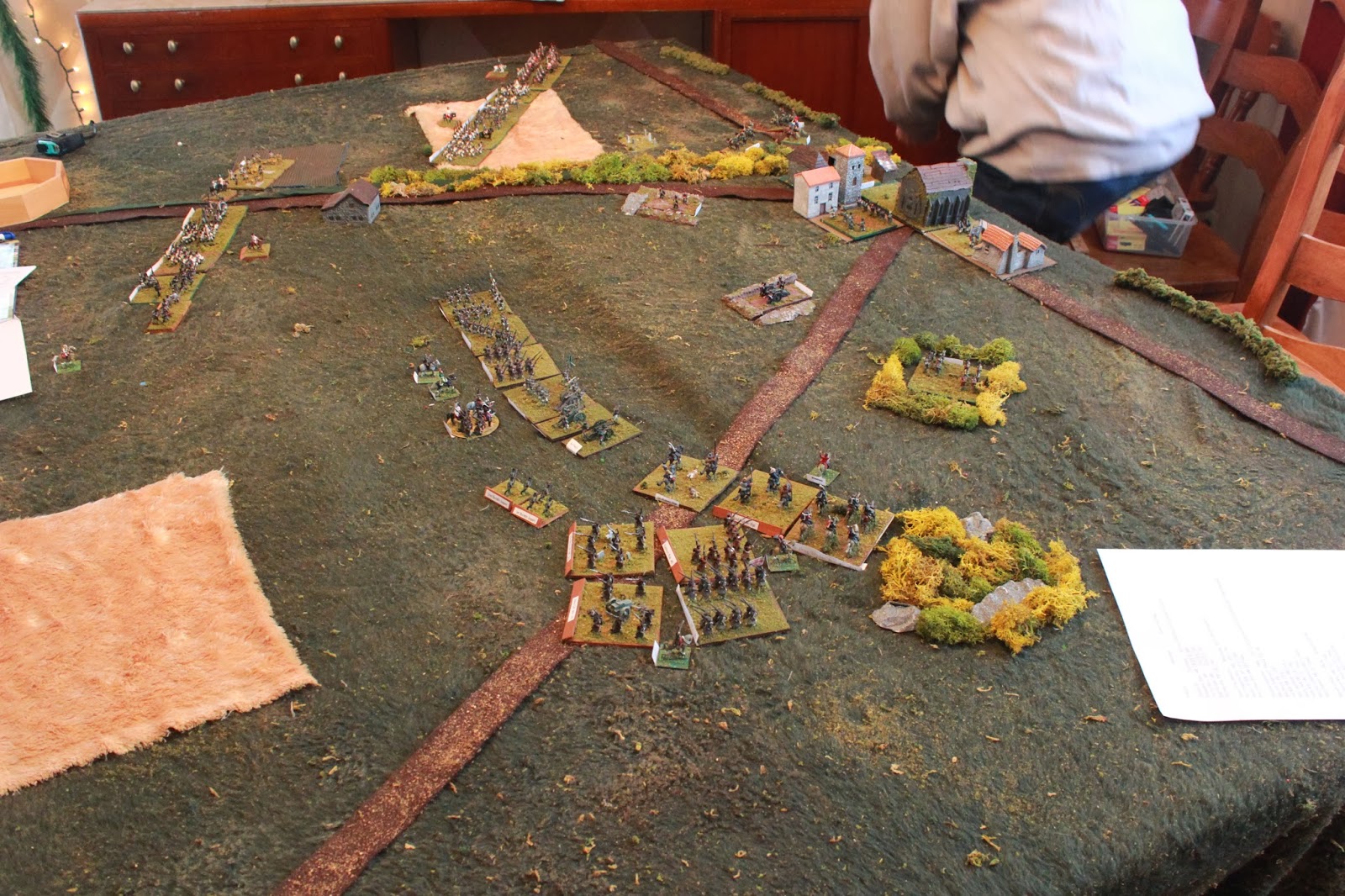 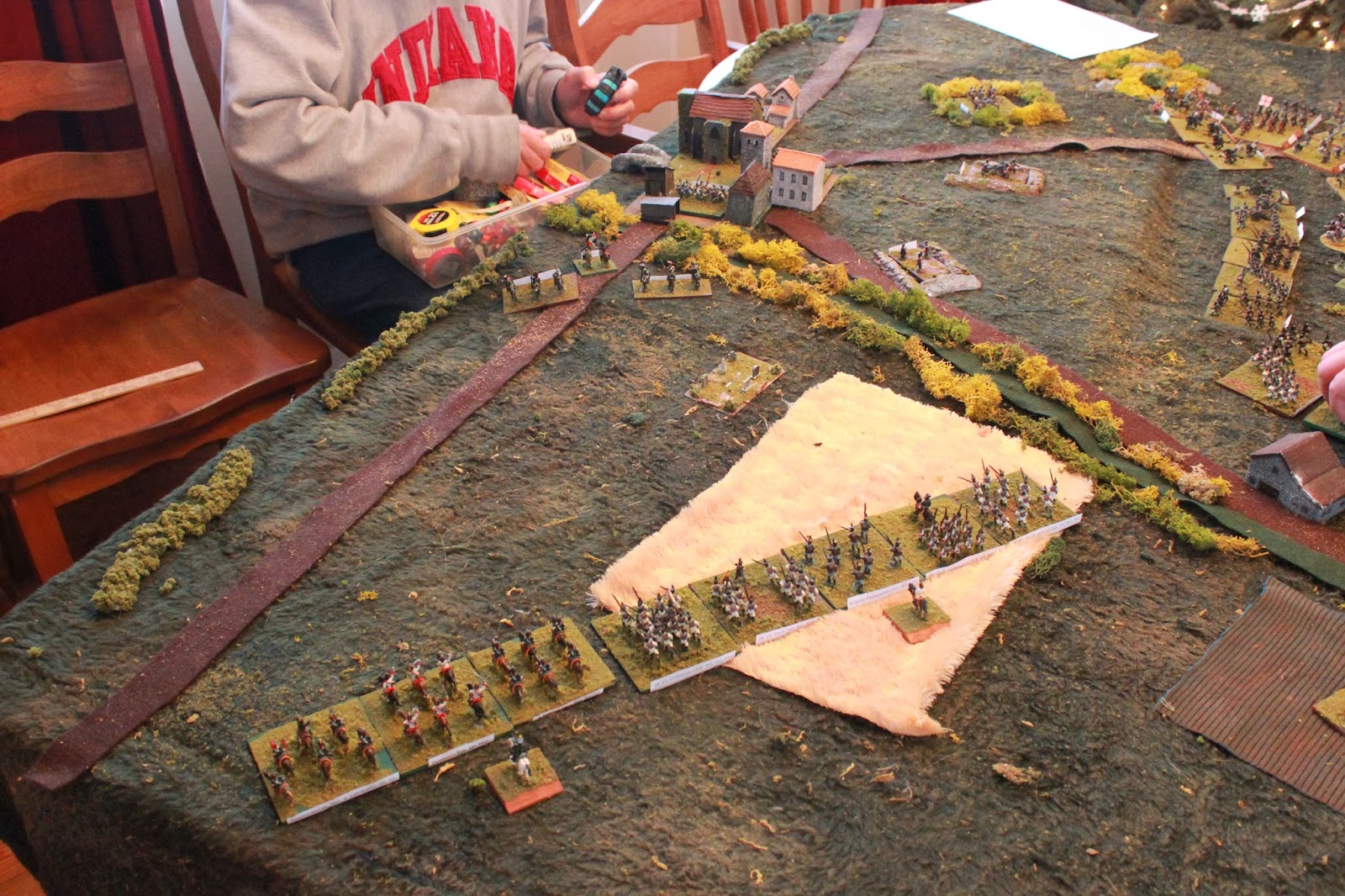 This turned out to be one of the closest games in which I have played. On the final turn, my final die roll decided the game.
The Russians were on the Allied right, the Austrians were their left. Both wings closed in on me from turn one. I received a Guard division as reinforcements and threw them into an attack immediately against the Russians. The Austrians pushed their artillery up to point blank range and started an assault against one of my redoubts. While that position held out, I attempted to deal with the Russians. 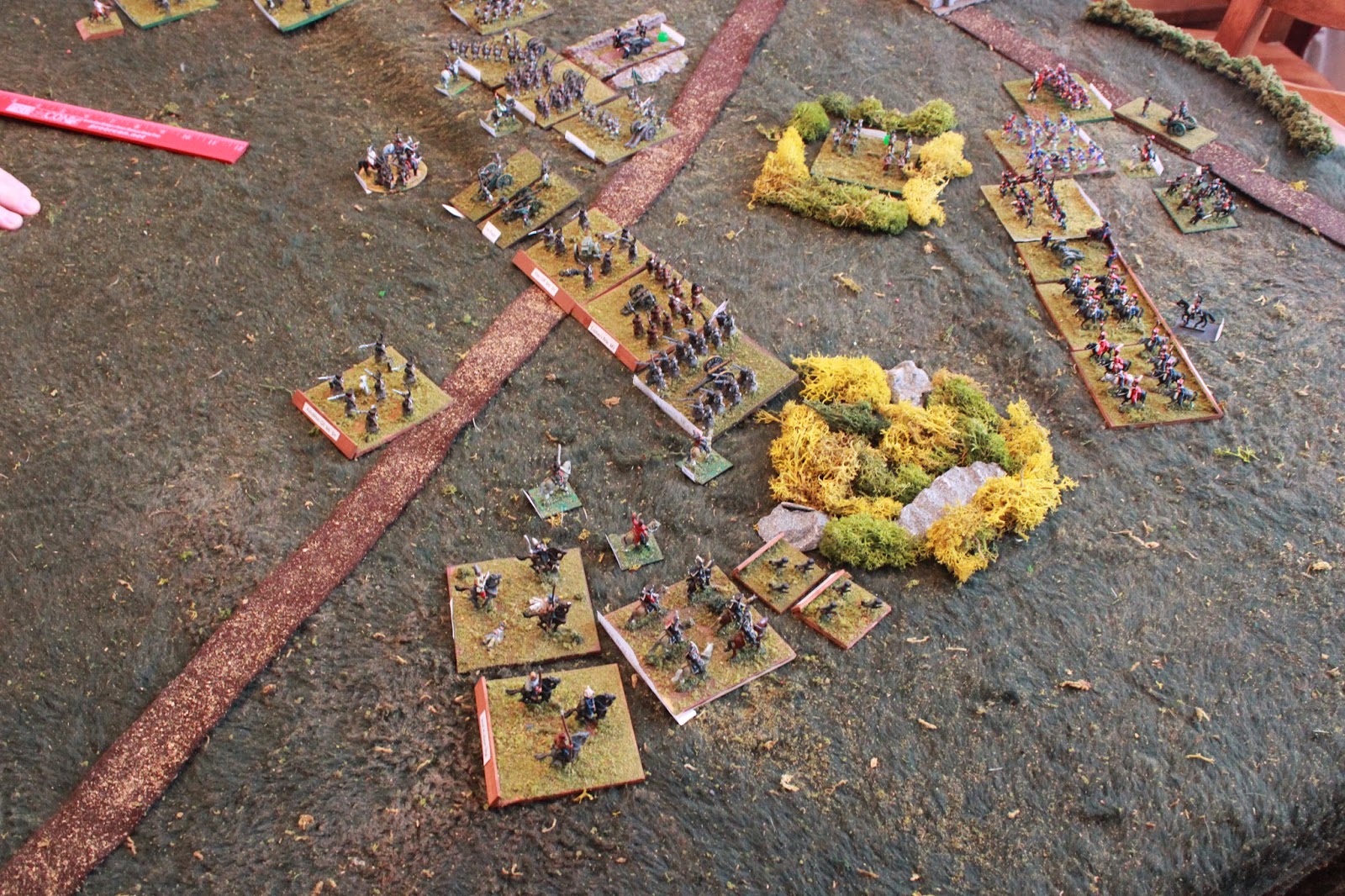 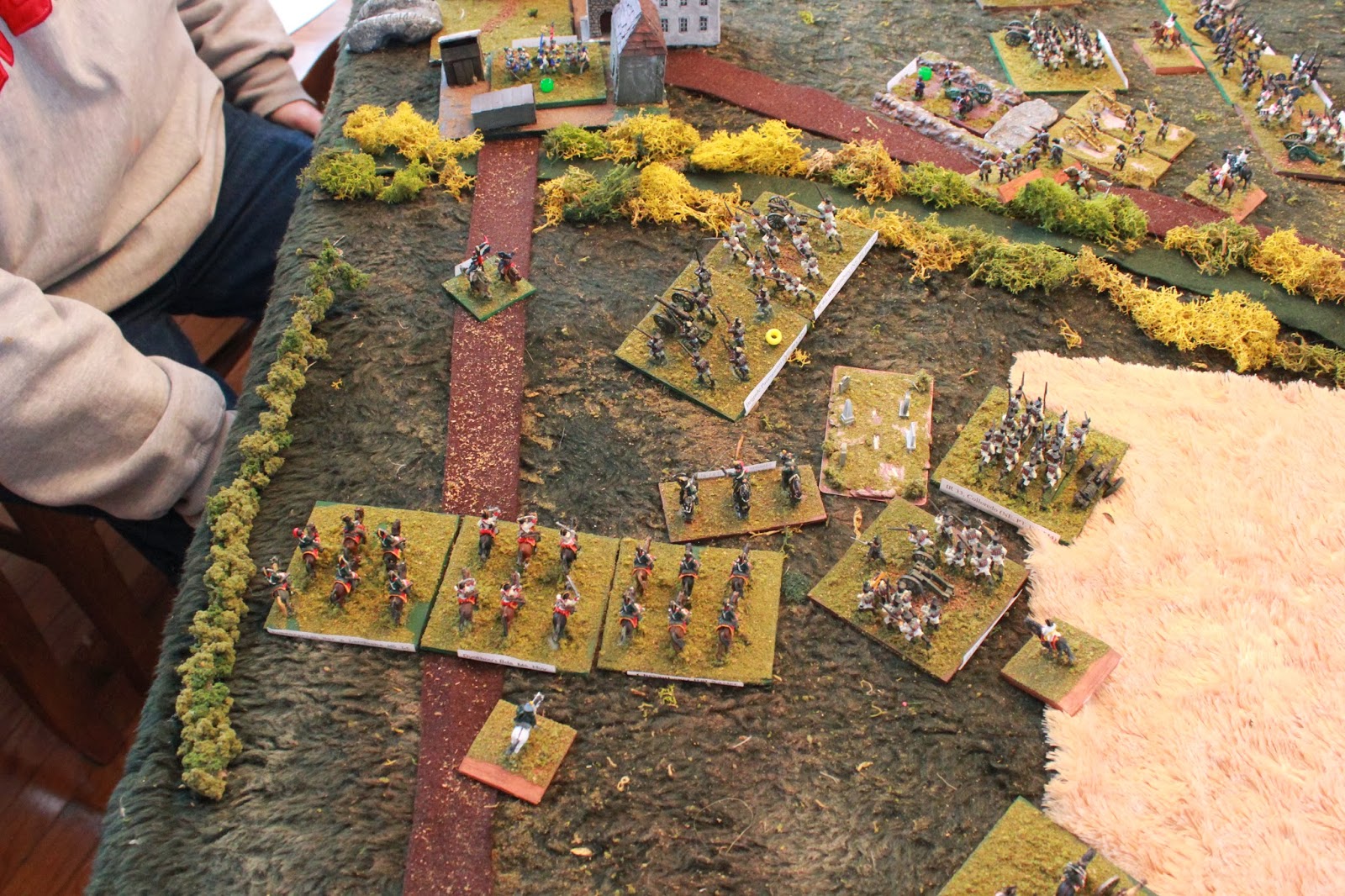 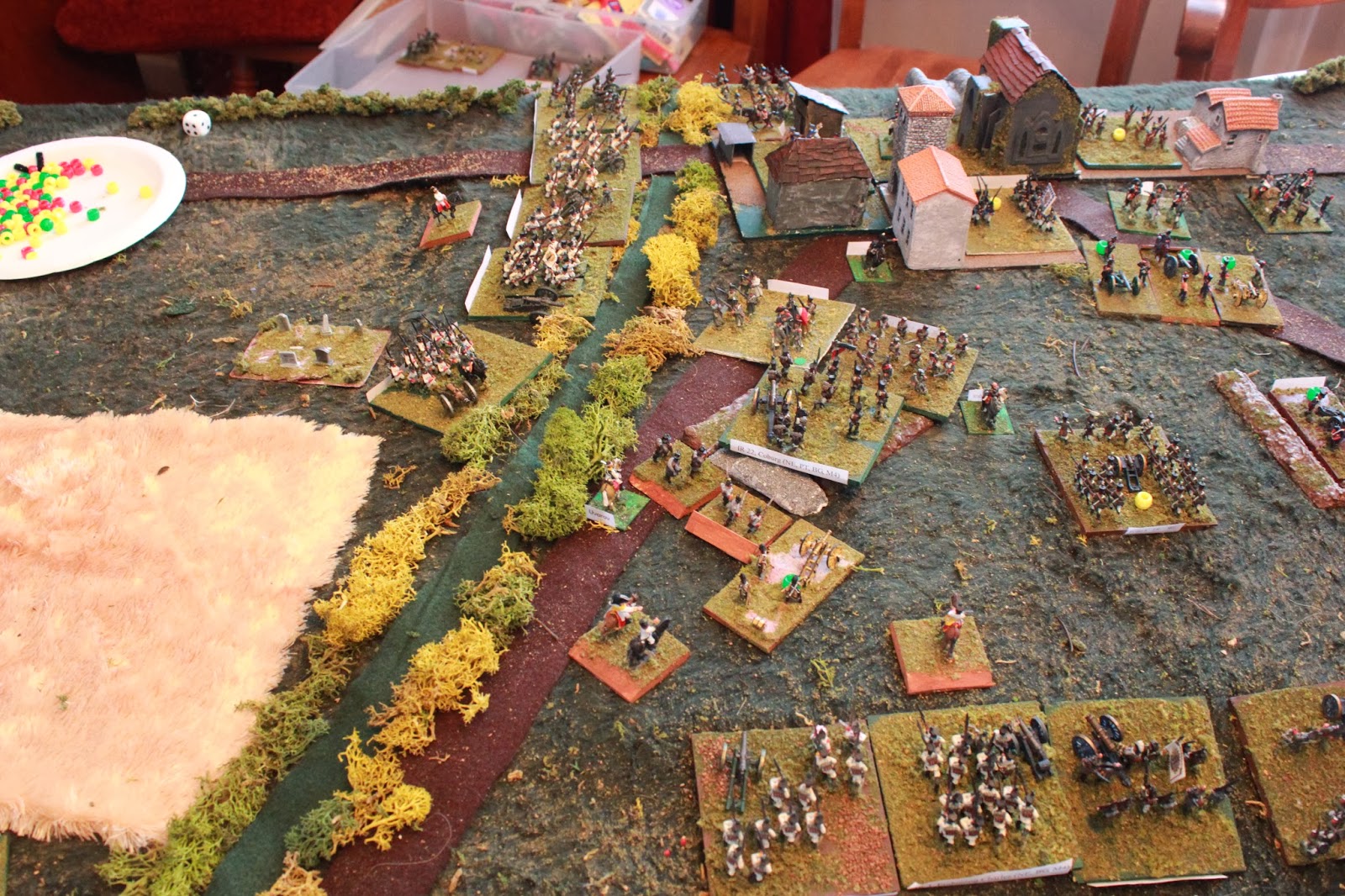 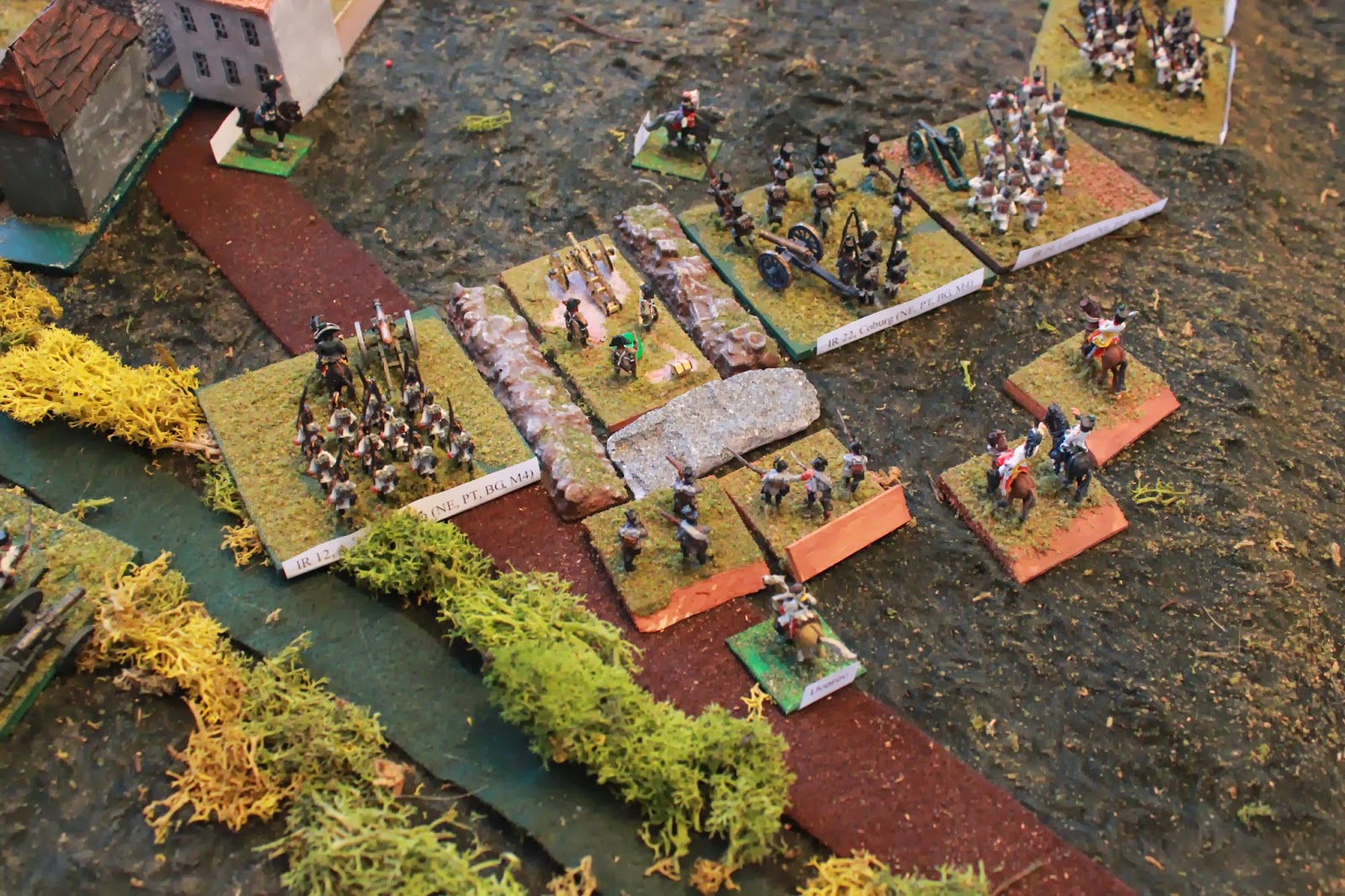 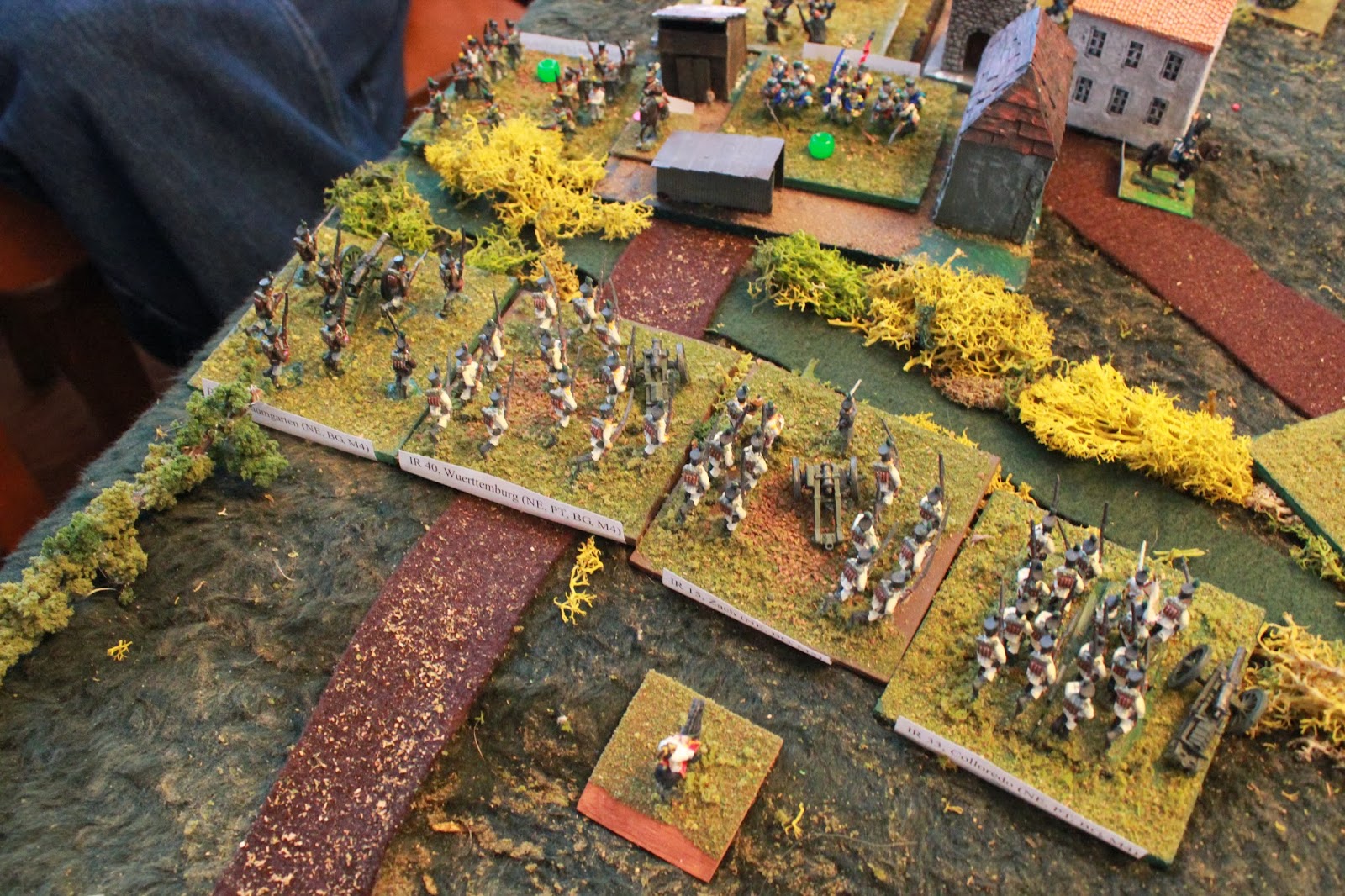 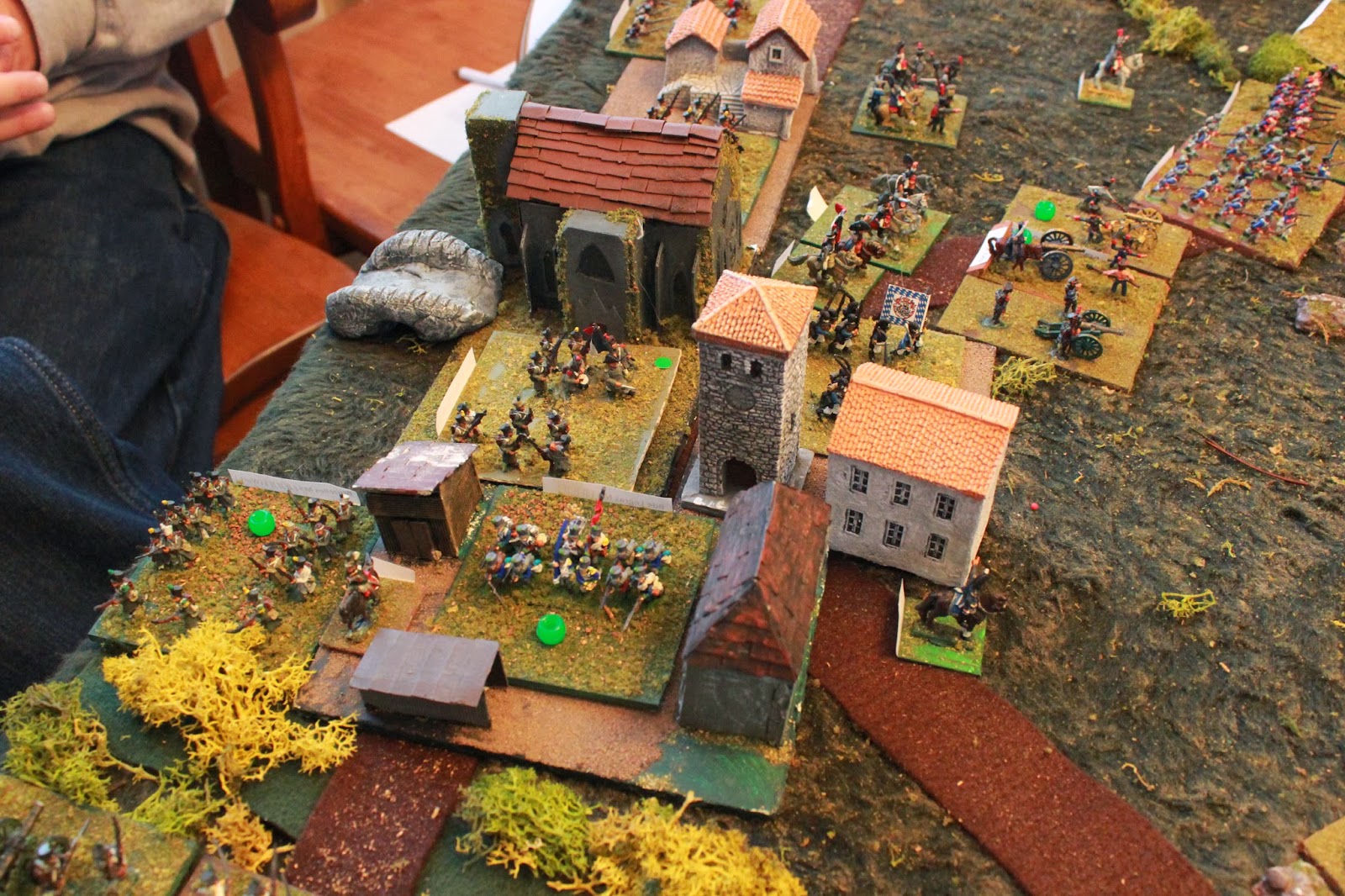 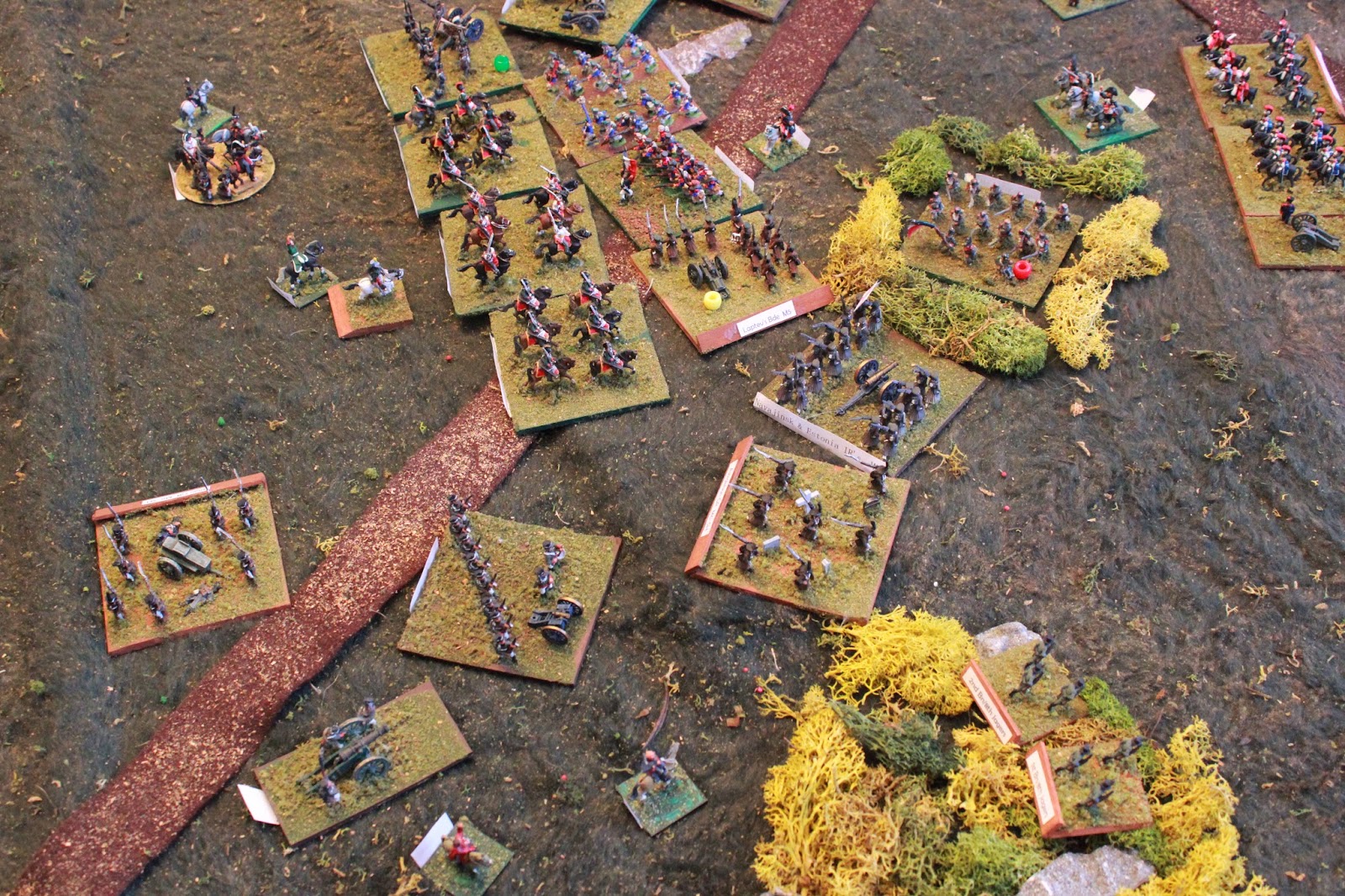 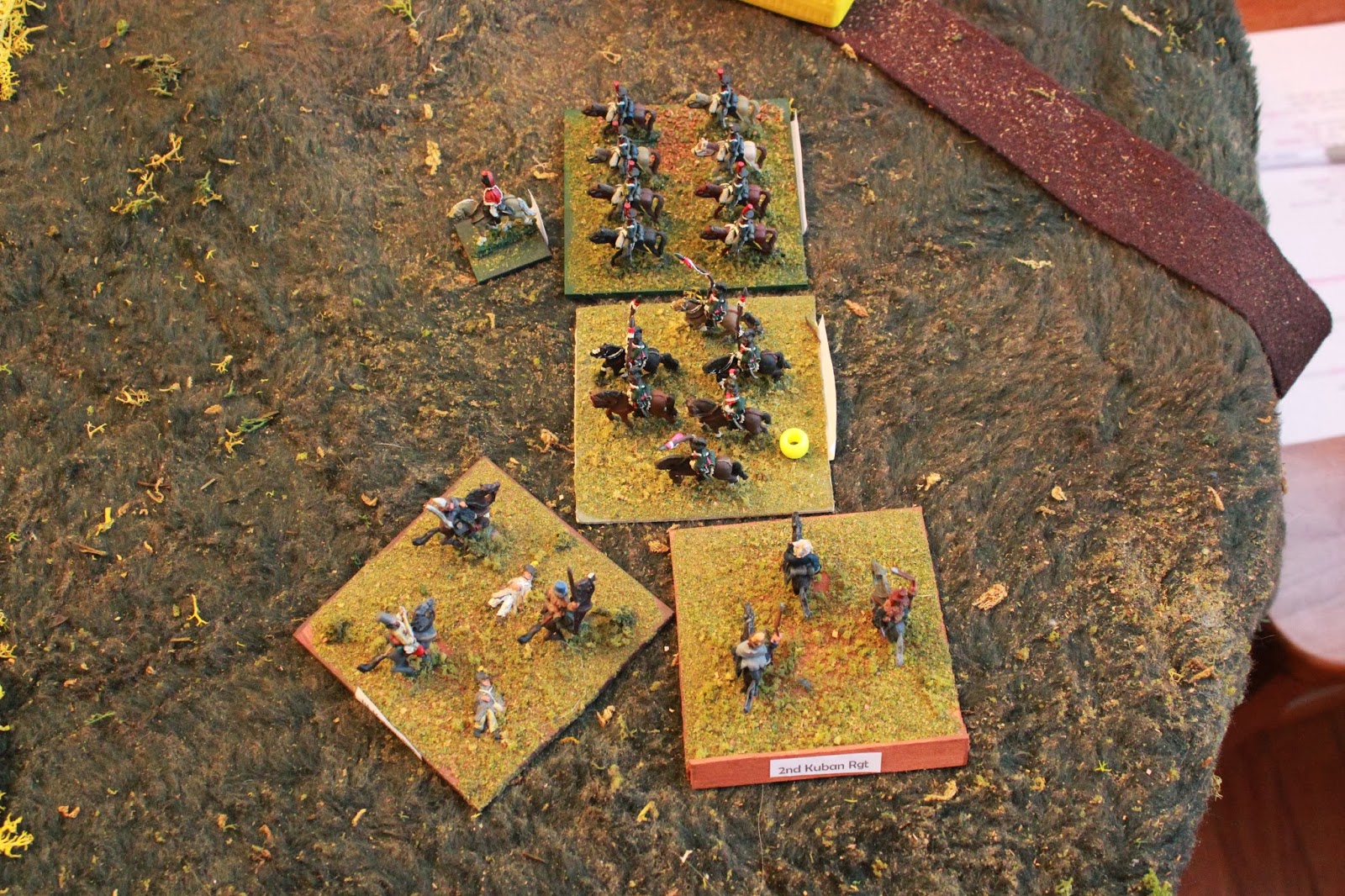 After 12 turns of furious fighting, the Allies made it to the outskirts of Dresden. By this point, every infantry division on the table was exhausted or collapsed. Volley and Bayonet used exhaustion and collapse to show the effects of combat on divisions. Once a division reaches it's exhaustion level, normally 50% casualties, the owning player rolls for collapse. To avoid collapse, the player must roll higher on one D6 than the number of casualties suffered by that division during the current player turn. I failed my final collapse roll and my last division retreated. 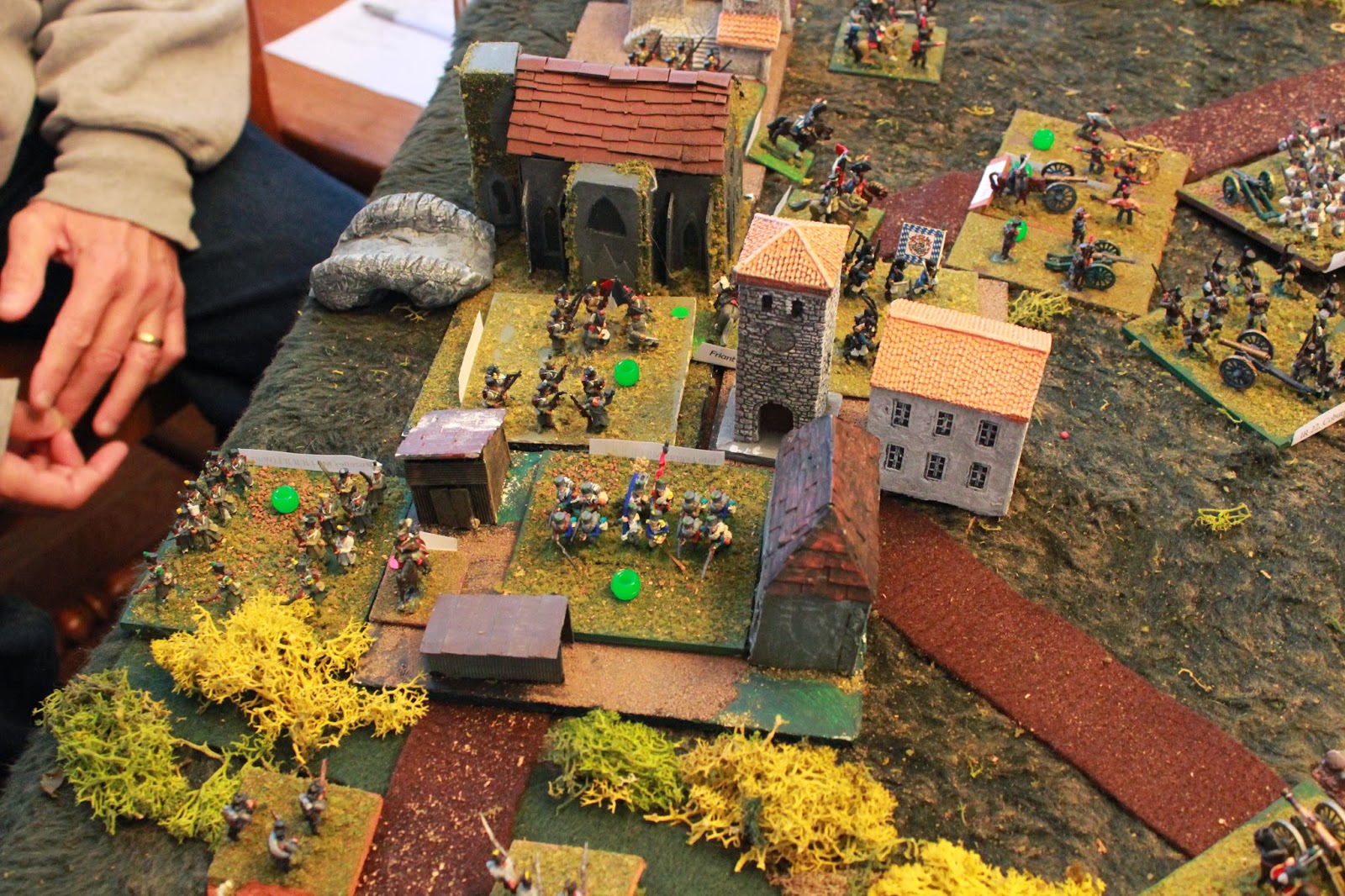