First Game of Flames of War

I played my first game of FoW this weekend and really enjoyed it. To be perfectly honest, I was not expecting to like this system at all. I have played Command Decision in it's different versions since it was first published in the late '80's and it is one of my favorite rule sets. It still is for the level of play it represents, the battalion commander.
FoW on the other hand is one level lower, the company commander. It is a fun system. If you haven't played this system, don't be narrow minded as I was, play it and have some fun. Richard provided the figures and terrain (and the coffee.) We played a meeting engagement between a mobile German force and and US paratroop force supported by arty and M-10's. I used the German mobility and zipped all over the place. In the end, I knocked out all of the US tank destroyers and most of an airborne platoon. Great fun, we will be playing more of this.

Richard has already purchased quite a collection, so I have offered to paint some infantry and vehicles as my contribution to this scale. All of my WW II collection is 20mm, plastic for the most part. 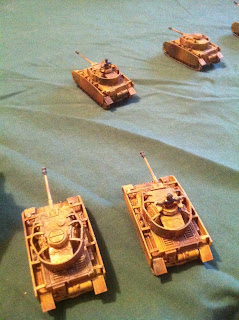 Our next club game will be a Command Decision game. In March we will do a FoW game for the group.