I played my first game of Lord of the Rings miniatures today. I'm not sure how I have avoided these rules for this long, but I'm glad I finally played a game.
My doctor invited me to a game with his gaming group.
My command was a warband of Wargs, with a Warg chieftain. The other commands on our side were a group of Wargs and giant spiders led by a mage, and a cave Drake.
We face two Elvish warbands and an Ent. Our plan was to hit their right flank hard and then turn on their left. Our movement allowed us to hit them first and off we went.

Our plan worked well and we killed half of the enemy force before we lost a figure. By the end of the game we had reduced them to 25% and either fully or partially controlled all VP locations.

It's a nice clean system and I hope to play more of it in the future. 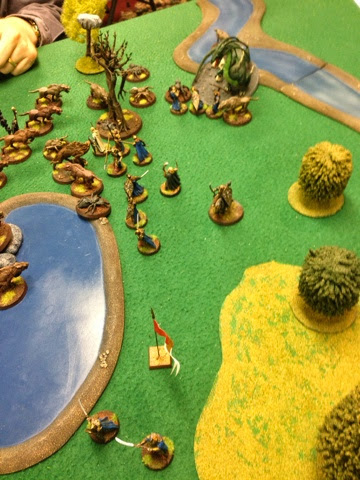