This past weekend was the War of 1812 Reception at Indiana University's rare books collection, the Lilly Library. My friend, Jim, and I presented our Battle of New Orleans game as part of it. 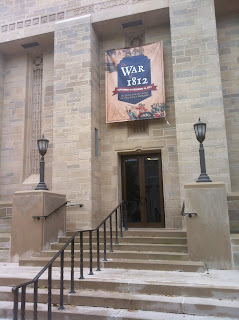 The Lilly is a little swankier than where we normally play with food and drink available at the reception. 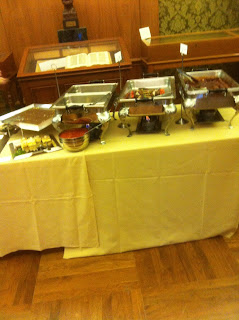 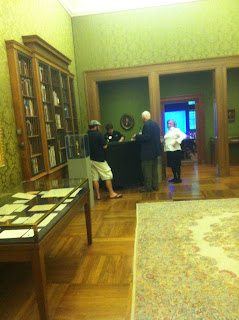 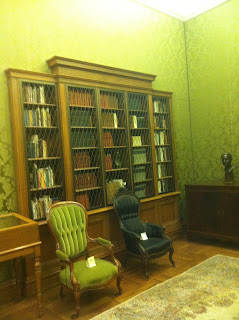 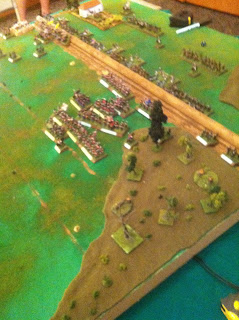 Friday evening's game was the historical set up with an historical result. The players and spectators were quite impressed with the terrain and figures.
On Saturday morning we played the game again, with free set up for both sides. The Americans reversed their line, putting Jackson's "Brigade" on their left, next to the cypress swamp, correcting anticipating that the British would make their main assault there.
The British set up their artillery in front of their infantry lines and bombarded the American line before launching their attack. This allowed them to create a few holes in the American line which required Jackson to commit part of his reserve. The British attack on the US right was a pinning move which worked very well. Two British brigades hit Jackson's left flank and exhausted that command. The American artillery exhausted the British artillery, but it continued to support the attack as best it could. The British crossed the canal and threw back the US left flank. On the other end of the line, the Americans annihilated the British facing them and started to move units toward the threatened flank. Due to scheduling at the Library, we had to stop at noon. On the last turn of the game, the 44th US charged the closest British unit and routed it, sending it back and causing disorder and routs in it's path.
The game ended with the issue still in doubt. One US command was almost gone, another was exhausted and the third was still able to fight.
The British has suffered one command eliminated, another one loss from being exhausted and the last one still in the fight. We will fight this again with plenty of time and see what happens. 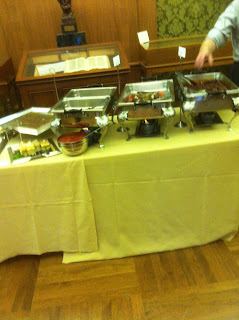