This year at the Origins Game Convention in June, my friend Jim will be GMing two sessions of Gettysburg using Volley and Bayonet. He and I did this exact game at Origins in 2000. In addition, Jim's wife is teaching a two session class on Gettysburg later this month. As part of that class, the students will have an opportunity to participate in our Gettysburg game as well. In preparation for this, we played the game at his home as a play test.


In all the games of this we have played, the key to the rest of the battle is what happens on McPherson's ridge. If the Union can hold long enough, they will hold Culp's and Cemetary Hill's and be in a great defensive position. If the Rebs can brush aside Buford's cavalry, and the I and XI Corps, they will hold the high ground and win. In this game the defense of McPherson's Ridge was very good. Heth's Division of the Army of Northern Virginia moves onto the board in a long marching column. They attacked Buford one brigade at a time as they came out of road column.


The other avenue of advance for the South is from the north. The Union XI Corps faced this threat and stopped it.

By the end of the first day, the Union I Corps has retreated south between Seminary and Cemtary Ridges. The XI Corps is standing just in front of Culp's Hill, and on Cemetary Hill.
The confederates will be at the foot of Cemetary Hill, but it's not enough. 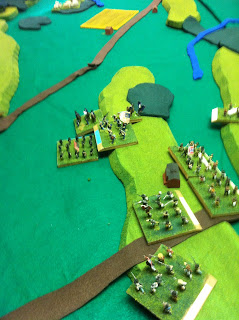 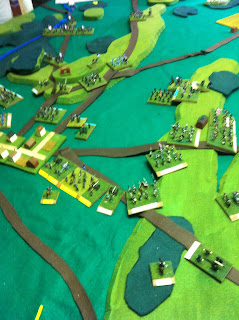 Longstreet's Corps arrives during the night turn. As it was moving up, the Rebel II and III Corps threw themselves at the Union line one more time; to no avail. Although Johnson's Divsion make head way, it was stopped.

By the time Longstreet is up and ready to attack, his two divisions are  the only intact units in Lee's army. If the Union can knock them out, the game is over. And that is what Brady and I did; we attacked Longstreet and overwhelmed him. 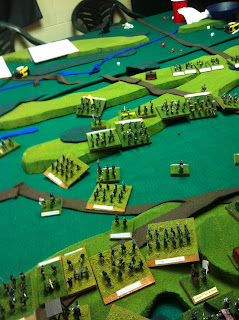 One Rebel brigade briefly advanced onto the crest of Cemetary Hill before we threw it back.


This is one of the classic scenario's. Have fun every time I play in it.
Posted by Mike at 8:25 PM