Shortly after starting my Russian Civil War project five years ago, my friend Richard gave me a Peter Pig 15mm armored train as a Christmas present. I was a little surprised as Christmas was months away and we did not give one another presents. I gladly took the gift and painted it and it made an appearance in our next game. At that point Richard confessed that it really wasn't a gift, he knew if I had it, the armored train would be painted and on the table quicker than if he had to paint it.
It's fun having an armored train to trot out when needed, and whenever I host a game and the railroad tracks are on the table, everyone wonders if an armored train will appear. Most often it does not.

Of course, having one armored train is never enough. I had the idea to scratch build one. I took air dry clay and sculpted the basic shapes of the engine, tender, and gun car. After the clay dried, I added a few details and painted and dry brushed it. I then realized I needed to sand some of the edges, so after that, I painted and dry brushed again. Total time, not including drying time was about four hours. 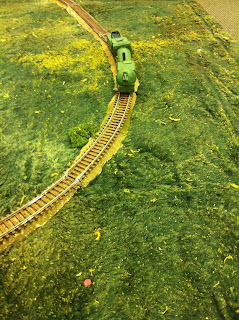 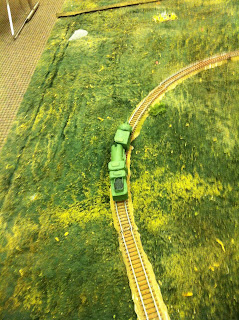 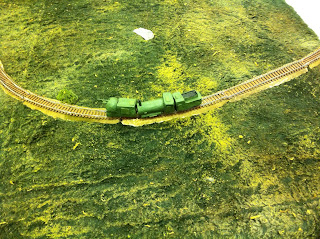 It is still very rough, and I plan to do another one. I will spend a lot of time sanding and squaring it. But it doesn't look too bad from 3'.
I can see a game in the future on Lake Baikal with armored trains dueling with gunboats!
Posted by Mike at 9:02 PM