My friend, Jim, is running four miniatures games at Origins this year. Two of them are games with Martin invaders. We play tested one of the games recently. This scenario has the Martians in a small town, attempting to load the comatose inhabitants of the town into their saucer. The National Guard is racing to their rescue. 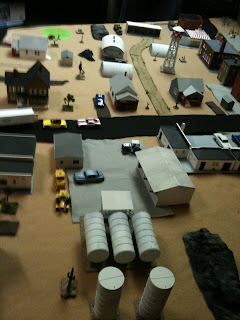 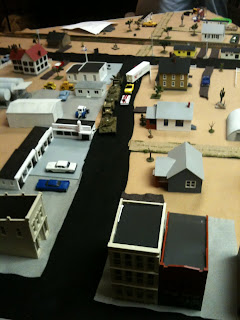 The rules are a variant of Dead Walk Again, which are written for Zombie miniatures.
The Martians have Ray Guns and Jet Packs. It was a terrible surprise for the humans when a Martian fired and vaporized a tank. The National Guard advance slowed at that point and they deployed for a slower, more deliberate attack.

The mighty saucer looms over the town. 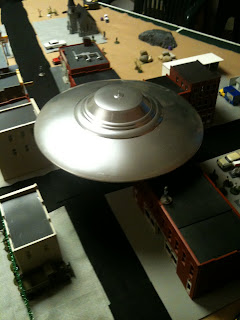 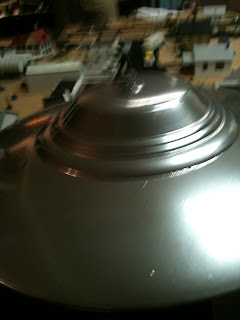 A squad of National Guard, about to be zapped by a ray gun. I got all but one with one shot. 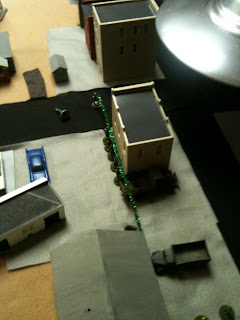 This tank pulled back, and prepared to fire across the length of the town. I had my final Martian riding on top of the saucer to chase it when he was picked off by a machine gun. 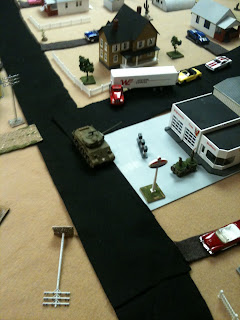 A very enjoyable game; even though the Martians were defeated.
If anyone is at Origns, I recommend this game.
Posted by Mike at 4:03 PM