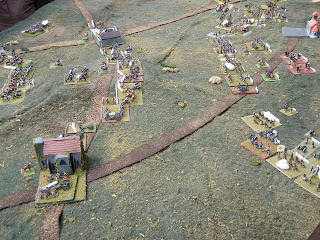 We refought Liebertwolkwitz this weekend using Volley and Bayonet, Road to Glory. There were four French players and five Allied players. I added "what-if" commands so everyone could keep busy.
The set up was historical with the added commands coming on as reinforcements. The Austrians, on the Allied Right, advanced on turn one. Most of the French cavalry moved behind the lines to the French Left. On turn three, the Austrians advanced to long range and opened fire. In their turn the Fench charged. By the end of the game, the entire Austrian Corps had collasped, leaving the remaing three French cavalry brigades to face a second Allied line of cavalry and Russian infantry. A lot of action on this flank.
On the Allied Left, the Prussians try to push against the VIII Corps and are stopped in their tracks by the Poles. How historical!
There are three small Russian Corps pushing against the French Center. They are commanded by two players and there is no coordination between them. The Russians take Liebertwolkwitz and the French are unable to throw them out. The Russians briefly hold about half of the original French Center before the French reserves throw them back and re-establish the line.
A fun game. The second edition of Volley and Bayonet is a keeper. 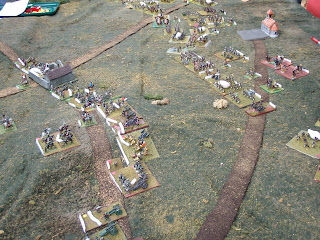 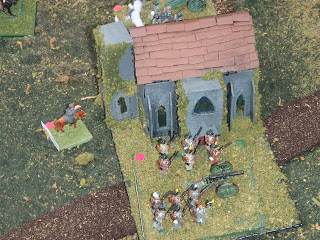 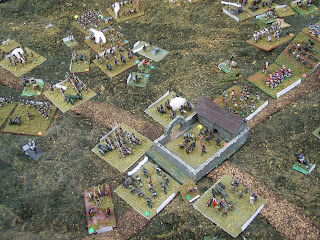 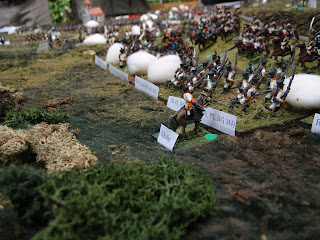 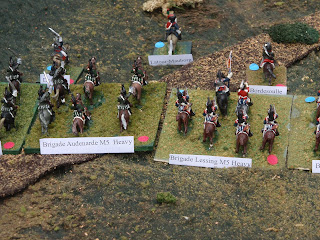