This was the classic situation; an all cavalry command attacks an enemy comprised mainly of infantry. Can the cavalry possibly win?

Well if half the infantry are conscripts, and the rules model the effects of the rain correctly...

There is a long ravine which is marked by lichen. Each turn the first player rolls for rain. The effects of rain are:
-All movement is halved
-The ravine becomes disordering terrain
-All fire casualties receive a saving throw 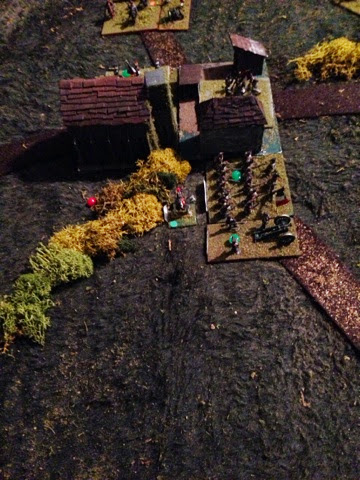 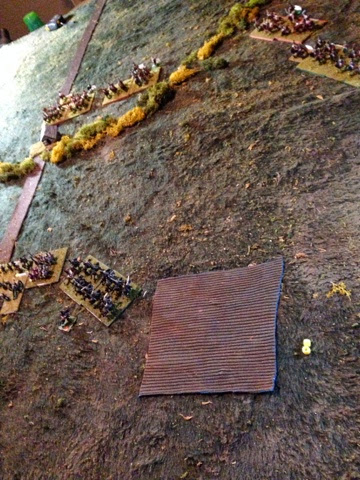 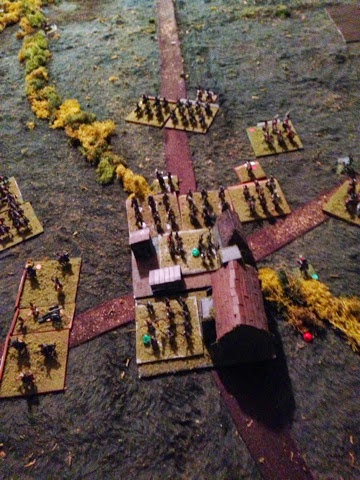 It was a hard fought game. Almost half of the turns had rain. That slowed down my withdrawal and at one point I made a mistake; I stacked my units in the middle directly behind a cavalry screen. If Jerry could rout the cavalry, they would rout down the line spreading chaos.
Surely he wouldn't see my predicament.

Of course he saw it. He attacked and in two turns destroyed half of my army--the good half. His Cossacks once again attacked my disordered and routed units. The last three games in which the Cossacks have been on the table have seen them destroy French units.

My Conscripts fell back into the town. As bad as things were, Jerry still needed to take the town to win and time was running out.

On the last turn of the game, Jerry destroyed my last units and advanced in the town.