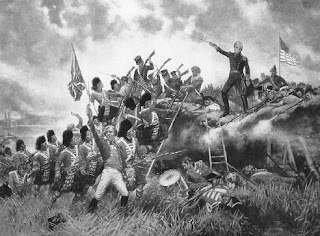 Next year is not only the bicentennial of Smolensk and Borodino, but also of the last declared war between the US and Britain. Here in Bloomington, on the campus of Indiana University is the Lilly Library. It has a large collection of documents and manuscripts from the War of 1812 and they are planning a celebration. As part of it, my friend, Jim, and I will be running some demo games. One of them will be the Battle of New Orleans.
We will use Volley and Bayonet at a reduced scale for the battle. Jim is painting most of the figures and I am responsible for the OOB. Here is the first take. Each strength point is equal to 100 men or two guns.
I've rated the British 7th and 43rd Foot as morale 6. Packingham planned to use these two regiments to maintain order in New Orleans after it's capture. The Highlanders are also rated morale 6.
For the Americans, Jackson is both Army Commander and Division Commander. The militia units are not rated as militia, merely Poorly Trained. By this point in the campaign, the Americans are very confident, believing they have already beaten the British twice. Due to their training, Plauche's Uniformed Militia retain M4, but are not considered Poorly Trained.