Yesterday at our club's September game day, Richard ran a Spanish Fury/Very Civile Actions game. I was busy running a Red Actions game and did not get to keep up on the flow of the game. I did take a few pictures. Richard also sent an AAR for the game. 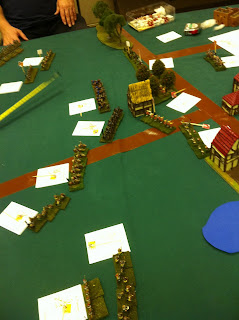 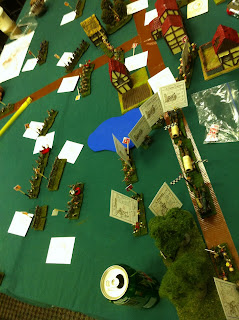 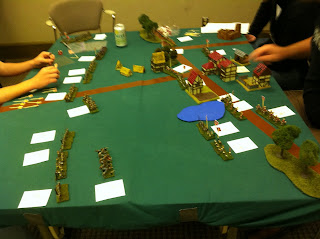 Jim Walker and Luke Casey commanded the hard-pressed Royalists defending the manor and, more importantly, the main road junction it commands, from the unexpected attack of superior Parliamentarian forces commanded by Jim and Connor True. Throughout the battle, reinforcements trickled in on both sides as supporters of the King fought to stop the Roundheads from taking the crossroads and falling upon the loot-fattened supply and pay train making its slow way along the main road. Total forces engaged by the end of the day were estimated at sixteen Royalist companies and five guns defending against twenty-two Royalist companies with no artillery.

Surprises abounded – mostly to the disadvantage of the Royalists. A surprise flank attack from off-board Roundheads assaulted the small fort whose brace of cannon dominated the crossroads and which anchored the right end of the Royalist line. Traitorous plots against the Roundhead forces were ineffective. But, a traitor to the King managed to distract the fort’s Royalist garrison while spiking the fort’s guns, enabling a small Parliamentarian storming party under its Fanatical Captain to lay ladders and swarm up onto the walls into hand-to-hand combat that took two “great turns” to yield apparent Parliamentarian success.

Just as the game ended after three “great turns”, the Inspirational Royalist Captain had decided to give the order to abandon the now-doomed fort and blow the powder supply. Perhaps the crews of the spiked guns would have escaped the conflagration, but this would have meant almost sure death or injury for those meleeing on the walls and, perhaps, disastrous results to the four companies (both Royalist and Roundhead forces) engaged close to the fort.

As “sudden torrential rain and devilish winds” brought the fighting to a close (we had to begin packing up the game at 5 to be out of the room by 6), the Royalists could be seen to have kept effective control of the main road and crossroads, if barely. Luke held at bay a strong force of New Model Army infantry reinforced by a regiment of heavily armored lobsterback cavalry on the Royalist left flank, whereas Jim on the Cavalier right had managed to form a strong line on the flanked right end of the Royalist position, guarding the road and intersection in the event of the loss of the fort (which seemed inevitable as the game ended.)

Connor’s Roundhead Dragoons on both flanks took noticeable casualties from the accurate fire of Royal cannonade (three demi-cannon and two demi-culverns, until the fort’s demi-cannon were spiked) and musketry. This, plus a Royalist terrain advantage which required fewer troops to defend than would have been the case on clear ground, stalled the Parliamentarian attack. The Roundheads lost three squadrons of Dragoons from two companies, two squadrons of Pike from one company and one squadron of Musketeers in the attack. Royalist casualties were somewhat less – consisting of four squadrons from as many companies (I’m not sure of the composition of the losses.)

The game lasted from about 1:30 (after preliminary briefings) to 5:00 PM with a 20-minute “R&R” break midway through. Referee’s Victory Ruling: Minor Victory for the Royalist side.