I just found this scenario that we played in September, 2011. The AAR is a post on this blog from that time. It is designed for the Perfect Captain's Red Action rules; my rules of choice for the Russian Civil War. This is the only game I've run with two armored trains.

The Defense of Rail Station #1703 White Players Briefing:
Two days ago, the front was 30 miles to the West. Today there is no real front; most of the army is routing to the East. Isolated groups are making a stand where and when they can. This is one of those stands. An armored train is on it's way to aid in our defense and assist our escape. Expect the enemy from every side.
Whites
Irkutsk Hussars
Three cavalry squadrons of three stands
76.2mm Field Gun

Red Players Briefing: Our forces have defeated the enemy in a major breakthrough yesterday. Seize Rail Station #1703 and cut off their retreat. It is lightly held.


All White units set up within 12" of the buildings, except their Armored Train, which enters on turn one from the railroad at the top of the picture. The Reds enter along the edge of the table at the bottom of the picture. There are three buildings on the table. The side that controls two of the three is the winner. Playing time is four hours. None of the vehicles parked near the buildings are operational. The Reds did not know this in my game. 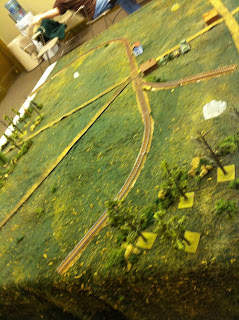