At the February gathering of the IU Conflict Simulations Club we played the Christmas Day Attack from the Command Decision Bastogne scenario booklet. It's a big game and needed more time than we had available, but we are concentrating on Command Decision so we can learn the latest version.This was the last attack on Bastogne before Patton's army relieved the city. Vehicles, figures, and terrain provided by Jeff, my ground cloth.

Bob, Richard and I played the Germans while Jeff, Big Mike, and Jim T were the US defenders.

Bob and I split a regiment of Volksgrenadiers and attacked the US right flank. We were supported by a company of Panzer IV's. Bob's battalion attacked Champs, while I moved through the woods toward Chateau de Rolle. 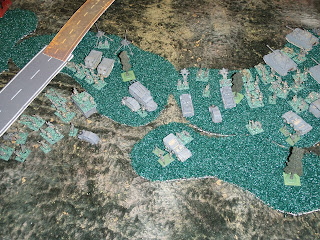 The US left is held by two batteries of artillery. 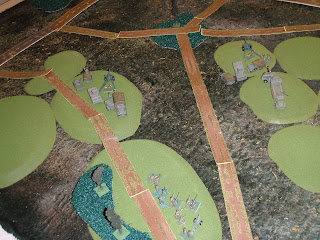 Richard rolled panzergrenadiers and armor down the road in a bold flanking maneuver. 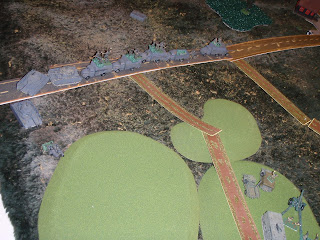 The German attacks go in...

The German attacks captured Champs, overran the artillery, and threatened Chateau de Rolle. The US reinforcements were sent to deal with Richard's attack and temporarily stopped him. He pulled back to organize for another attack.

After taking Champs, Bob turned his armor to support my attack.


German reinforcements rolled on. I was confident that one more turn of fighting would have give my control of Chateau de Rolle. Richard was ready to attack again supported by our reinforcements. We were celebrating our victory.

The US players were just as positive that they could hold against anything we could throw against them.

And of course, time ran out. A fun game. We are getting confident with the rules. If the US players had just given up, it would have been a perfect day.

Next month we will play the Mokre scenario from Bob Mackenzie's excellant website. It is a smaller game and we believe we can finish it.