We recently gathered at my place for another Volley and Bayonet game; this one a hypothetical battle following Leipzig. War Artizan from the Miniatures Page posted an AAR and I decided to take his idea and run with it.
This battle assumes that the Allies were able to coordinate their pursuit of the French and cut their line of retreat. The battered French aremy must push through the Allies and get Napoleon off the table.
The French corps have all been reduced to divisions. Two corps have been left off the table; detached for one reason or another. The Allies start with one Austrian Corps on the table in a blocking position and two Prussian and two Russian Corps arriving as reinforcements from random roads. The Alloed Corps have all been reduced by 50% from their pre-Leipzig numbers.

The French advance from the top of the picture to the bottom. Prussians and Russians are moving on from the left. 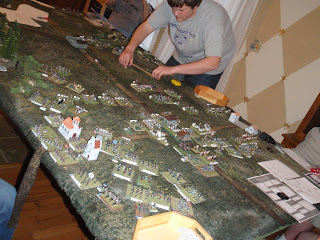 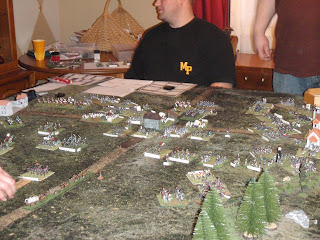 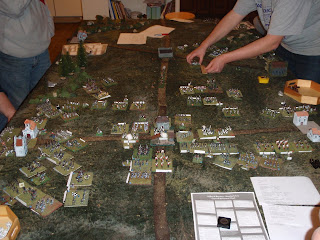 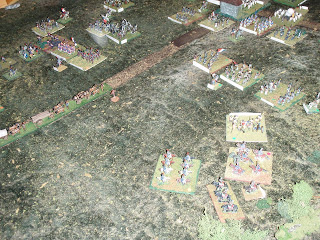 This shows the farthest French advance, still two feet from the edge of the table. Although the French moved well, the Allies were able to close in on the French right and put two strong lines of troops in front of them. One Austrian brigade defended against every attack and didn't move back an inch, (M4 poorly trained at that.) In the end, the Allies held and the French retreat ended. 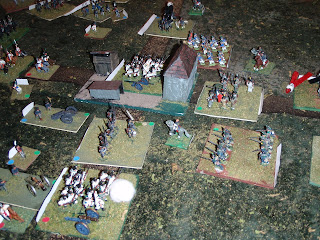 It was a table full of troops. Perhaps too many. But with seven players, everyone needs 8-12 stands to push.
Posted by Mike at 8:38 PM